Terry is Chief of Security of the A.R.C, and a father figure to Benjamin.

Terrance Mason served in the British Army for an unknown period of time, including the Falklands War in 1982. He was also a friend of Benjamin's father and after the latter was killed in action, Terry took care of Ben. The two then joined private security in 2001 after the death of Terry's wife.

Prologue: We Have A Situation[]

Although Terry wasn't seen in the Prologue, He did mention that he was above Security Clearance 3 when the U.D.R.C. Outbreak occurred.

Terry is first seen in the control room during Jake's first arrival at the A.R.C.

On the second day (If Jake stays in the Canteen), Terry introduces himself by firing a bullet from his Colt Python upwards into the ceiling to defuse a potential riot when Tyrone and several of the inmates demand gas masks. To calm them down, he assures them that he personally ordered them and will be delivered in good time.

On September 16th, 2013, Terry and some of his men seek refuge in the Security Control Room during the A.R.C. Outbreak. Sometime later, Inmate and former SWAT sergeant, Jake Hawkfield runs into the Control Room, and is introduced to Terry, Ben, Bryan, Junior, Matthew, Hector, and Takeo. The team then make a plan to turn off the power to access the Maintenance Area from the core. Jake and Hector go to the South Wing, while Matthew and Takeo go to the North Wing to turn off the power relays. Ben and Terry mostly stay in the safe rooms to guide Jake and the others. While Jake, Matthew, and Bryan go to the Maintenance Area to reset the M.G.P.S., Terry and the others start packing up and moving to the Shooting Range on Level 1.

Jake, Bryan, and Matthew return to Level 0 after restarting the generator and find a helicopter at the core, and on the way to the Shooting Range, they hear gunshots and find dead soldiers. During the shootout, Junior is wounded and Terry starts treating him.

Later on, Terry and the group move to the Oxygen Room on Level 2. If Jake rescued all the survivors, Terry will give him the key to his office, where Jake will find his Colt Python.

Later, the soldiers attack the safe room resulting in the deaths of many of the survivors, with only Terry, Bryan, Junior, Matthew, Ben, and Eric surviving. Terry, Junior, Ben, and Eric go in the first elevator to Level 5 while Bryan and Matthew stay behind to fend off the soldiers until the next elevator arrives. At that moment, Jake arrives to assist Bryan and Matthew until the second elevator shows up.

Jake, Matthew and Bryan arrive at the Surface Access to meet up with the others and clear the room before the parking lot, but see what appears to be sunlight coming out. Matthew scouts ahead, only to find Ito and his men waiting for them. The soldiers surround Matthew and placed some charges on the support beams prior, Matthew is killed and Eric is caught in the crossfire. Jake, Terry, Ben, Bryan, and Junior make a run for the core access but split into two, forcing Jake to choose a path.

If Jake goes with Ben and Terry, they will go to the Core Command to activate the train in the Maintenance Area and provide a backup escape route to the surface. On the way there, they encounter more armed personnel and are forced to engage them. When they finally reach the Core Command, Ben finds a reading of the M.G.P.S. that shows them the the pressure is off, which will destroy the facility before the group can escape.

The group head for the core to go down where a harrier arrives to take them out, but the group evades the jet by going through the Eastern Core Access and it crashes into the door. The team goes down to the train and Ben goes to the control room to start it. Ben however, decides to stay behind and head to the M.G.P.S to delay the destruction of the facility, but Terry jumps out of the train as a result and goes along with Ben.

It is unknown if the two survived or not.

Terry has been taking care of Ben ever since his father was killed in action.

Notably, if Jake saves all encountered survivors, Terry will be impressed and is grateful enough to offer Jake his Colt Python as a reward.

Terry is wise, hardened, and will do anything to keep a promise. Terry also appears to have medical skills as shown when he is healing Junior's wounds. He is also mentioned to be a skilled pilot as Matthew mentions how Terry can pilot a helicopter. 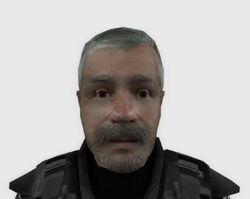