The SOCOM Mk.23 is a pistol used by both Jake Hawkfield and the Police, It is also one of four weapons Jake has in the prologue by default, the other three being the Baton, Heckler & Koch MP5 and the Sniper Rifle.

At 12 rounds, the SOCOM has the lowest magazine size of the three semi-automatic pistols, but it trades this for significantly improved damage and a laser sight.  This allows easy aiming from the hip in close-quarters combat, making it easy to score headshots on single or small groups of infected.  In addition, the ironsights, while not quite as clean as those of the Beretta, are not impacted by the silencer, making the SOCOM an ideal pistol for stealthily picking off enemies at close to medium range. 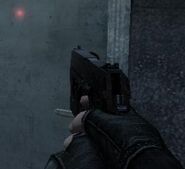