Mia Kitano is a character in Underhell. She appears to be a friend of Jake's Wife and is Raito's sister.

Mia was involved in the Posterus Project headed by Tom Hawkfield.

Prologue: We Have a Situation[]

Mia is first mentioned by a worker at the U.D.R.C., claiming that she's the only hope they have.

She is mentioned several times in Underhell. One mention is in the diary of Jake's wife, which indicates that they were childhood friends. She was also mentioned by a hostage in the U.D.R.C. The hostage claims that she is the "only one that can stop this". She later makes her first in-game appearance in Chapter One when Jake activates the elevator in the North Wing of the A.R.C. and is being chased by a couple of ACEs. She passes out in the gas chamber and Jake finds her, along with his father's journal. He is then knocked out by Ito who activates the gas chamber, but Jake puts his gas mask on Mia to protect her. Raito and the Hermit then show up shortly after Ito leaves the scene, where Raito rescues Mia and the Hermit takes Jake to his lair. She is also heard in Chapter One's House dreams talking to Tom. 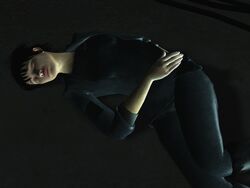