"Do you people even know what the government is? You think it's a room full of polititians that make decisions? There is no government. The president, The democracy, it's all a bunch of fucking lies! They feed you bullshit because that is what you want to hear, because you can't handle the truth!" - Matthew Porter

Matthew "Matt" Porter is a character in Underhell. He was a member of the A.R.C. Security Team. He was also one of few NPCs that wears glasses.

Not much is known about Matthew's back story except that he used to work for a military compound. He was also married once to a woman named Rebecca, but dumped her over the phone.

Takeo then goes missing, and Matthew then comes across Eric, Carl, and Todd. Matthew then devises a plan to escape the North Wing once the last relay is off. Todd and Carl will set up barricades while Jake checks the doors. Afterwards, Jake turns off the last relay and the group run back to the Western L Wing. They then find Bryan waiting for them near the Western Core Access, and the latter explains that he wanted to join Matthew without Junior noticing. But Junior shows up on cue and the two brothers fight. Matthew then briefs Ben on what happened to Junior, and the latter takes Eric and his crew back to the Security Room. Matthew then finds a radio and he, Bryan and Jake go to the Core.

Once inside the core, Matthew radios Malcolm to open the Eastern Core Access. But during so however, Malcolm is killed by Igor. The trio then head for the Maintenance Area and find a train, and Matthew asks Terry what it's used for. They then head for the sewers to restart the Multi Generator Power System. (M.G.P.S.) On the way there however, Jake gets separated from the trio and falls into the Maintenance Quarters. Shortly after Jake resets the MGPS, Matthew and Bryan show up in the lift.

The trio then head back to Level 0 where they find a helicopter. The Southern Core access suddenly opens up and the trio check it out. They then head for Level 1 where they hear gunshots being fired. They head up to the Shooting Range to find some dead soldiers near the entrance. The group lets the trio inside and find Junior wounded. Takeo then shows up out of nowhere and explains why he left. Later, the group find out that Matthew is an intelligence agent sent to destroy the A.R.C..

Later in the Oxygen Room, Matthew reveals that he had a few other colleagues working undercover for the A.R.C.. He finds out that Takeo was not an official security guard and starts shooting him when he started cloaking. It was also revealed that he was looking for info on the Terminus Project.

Later, Matthew and the group are ambushed by the PMCs resulting in most of the survivors killed. But Matthew, Bryan, Terry, Ben, Junior, and Eric escape to the North Wing elevators. Terry, Ben, Junior, and Eric get in the first one, and Bryan and Matthew hold off the incoming PMCs. Jake arrives at the last moment and assists the two in taking out the soldiers until the second elevator arrives.

Jake, Bryan, and Matthew meet up with the others at the Surface Access to steal some vehicles from the parking lot. But when Matthew checks out a light coming from the doors, he finds Ito and his troops waiting for them and hold Matthew at gunpoint. they've also placed some charges on the support beams behind Matthew, and they explode, killing him. At the same time, Eric is gunned down by the soldiers.

Matthew later appears in one of the windows with Takeo in Jake's lucid dream.

Matthew seems to show distrust and underestimation to his new squad mate Jake, likely because of what happened at the U.D.R.C.

Matthew says that his superior always said "Ha you hooligan" to him. In the tutorial, if you go outside of the shooting range during weapons training, Frank will say "Hey, get back behind the line ya hooligan.In the Prologue if the player storms the hospital and gets to the second floor without ordering the other SWAT teams the storm the building Frank will say "Jake, your going in on your own? Attention SWAT units, storm the hospital. Ha, ya hooligan" It's possible that Frank is Matthew's superior.

Matthew and Bryan have a rather on-off hostile relationship. Prior to the outbreak, they get into an argument which nearly escalates into a fight before they are stopped by Terry. After Ben discovers that Matthew is a spy, Bryan and the others have a strong distrust of him. There is conversation that Matthew has with Bryan about the former's wife, who he felt could and would have killed him if he confronted her about his feelings for her. Bryan scolds Matthew, calling him weak. Despite their toxic relationship, they always put their hostilities aside when trouble arises. After the PMCs raid the safe house, Bryan remarks that he could still shoot Matthew. 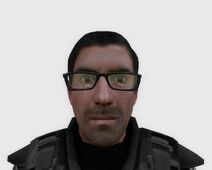 Matthew standing in a room rigged by explosives. (His last moments)