Malcolm is a character in Underhell. He is part of the A.R.C. Security unit.

Malcolm is first met in person behind bars just after meeting Matthew, Eric, Todd and Carl. Malcolm and Matthew discuss a plan with Jake and the others by delaying the victims in the accident. While the group hurriedly began to barricade for the incoming assault, Malcolm eventually opened the doors for the group, allowing them to escape.

The group eventually make it towards the Core where Malcolm is forced to defend himself in the Eastern Core Access. Malcolm is heard panicking then being mutilated, gorrified, and killed by Igor, who then flees, most likely taking whatever is left of Malcolm's body. As suggested by Bryan and Matthew, Malcolm was killed, either from the wounds inflicted by Igor, or by bleeding out from massive blood loss. 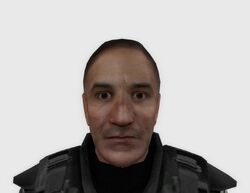