The Heckler & Koch MP5 is an submachine gun used by the SWAT, PMCs, and Jake Hawkfield. It is one of the four weapons Jake has by default, the others being the Baton, the SOCOM and the Sniper Rifle.

The MP5 is one of the few weapons in Jake's loadout at the start of the prologue. They are also seen in the hands of PMCs throughout the whole chapter.

In Chapter One, the MP5 is once again used by PMCs, but is also utilized by Terrance Mason near the end. 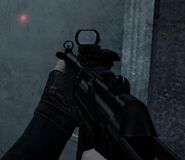