The Hermit is a character in Underhell. He navigates using the ventilation tunnels at the A.R.C Facility. 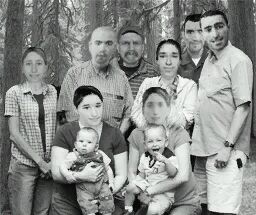 The Hermit was the head of a family of 12, consisting of siblings, a wife, children, and grandchildren, until a fire struck their home killing all but the Hermit himself. He has also found work at the A.R.C after the facility was built.

The Hermit is mentioned by a couple of inmates and guards before the start of the infection. One guard mentions that he is responsible for cleaning the vents and if he dies, then everyone in the facility will suffocate as well.

Jake first meets the Hermit in the vents on Level 0 of the A.R.C, where his trap will violently injure Jake, exclaiming that Jake 'broke his trap with your face' and then later requests Jake to find him 5 cards in exchange for his wrench.

Jake meets the Hermit for the second time whilst exploring the High Security Block, where he can be found as he comments how he was looking for Jake, he will then tell Jake he hasn't forgotten about the cards, reminding the player to try to find them in order to continue the Wrench Quest.

Jake meets the Hermit again whilst wandering through the Maintenance Area and asks him to find him 6 more cards for an FM Radio.

It is implied that Jake, Bryan, and Matthew were helped by the Hermit when they got back from rebooting the MGPS, when the door to the South Wing Core Access mysteriously opened. The implication is from the opened vent on the ceiling in the Core Access control room. The implication is also supported by the chocolate bar that Jake finds on the floor near the vent, along with the Hermit saying "Oh, and you're welcome for the door" later on.

Jake meets the Hermit for a third time in the vent room next to the Shooting Range. The Hermit asks Jake for 10 more cards and he'll pay him back with Radiocrackers.

The Hermit has also hidden Jake in a vent while the latter was hallucinating on the second level.

Jake meets the Hermit once again in the vent room next to the Oxygen Room and asks him to find 10 more cards to give Jake his Crossbow in exchange.

After Jake is gassed and Mia is taken by Raito, The Hermit recovers Jake and brings him to his lair. If Jake has collected all the cards (including the Hermit Card), The Hermit will tell Jake about his past life and will go to his room to play his guitar and sing. After he finishes his song, a gunshot is heard, implying he committed suicide, but after the credits, a short scene of The Hermit coming out of his room holding a revolver ensues, briefly expressing his dislike for rats before walking out of the room.

The Hermit uses Jake to give him a new card deck, and will give him some useful items in return. He also helped him on 3 situations.

The Hermit helped Raito through the vents a couple of times.

The most notable interaction was during Jake's rescue when he was suffering in the gas chamber.

He's quite good at making contraptions.