The Colt Python is a magnum hidden in a blood filled room in the apartment across from The Hospital, and also in the back room of the Chief Of Security office in the Level 2 Offices. The key is given by Terrance Mason if you rescue all encountered survivors. 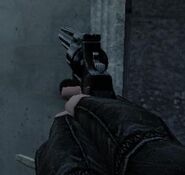 Add a photo to this gallery
Retrieved from "https://underhellmod.fandom.com/wiki/Colt_Python?oldid=13975"
Community content is available under CC-BY-SA unless otherwise noted.