Hello, just call me Ben, will ya? - Benjamin's Intro

Benjamin "Ben" is part of the A.R.C. Security Team.

Benjamin appears to be the inexperienced and cowardly personality of the A.R.C. Security Team. He speaks fast and somewhat awkwardly. He even shows that he is gullible.

Ben's father was in the British Army, but was killed in action when Ben was a child. Terrance Mason, who was in the same platoon as Ben's dad, brought Ben the news, and has taken care of him ever since. Sometime in 2001, shortly after the death of Terry's wife, he and Ben joined private security and put Ben in charge of the systems.

Ben is first heard on the Facility's PA System, he later makes a full appearance in the Security Control Room. The group make a plan to escape, and to do so they decide they need power to open up the Core access. Ben starts explaining about the Multi Generator Power System (MGPS) and it's functions. Apparently it's a group of 5 multiple generators, 4 that create the grids and the fifth one that holds the main power, and if the base needs more power than the fifth generator can have, the other four try to help which would cause the fifth one to shut off. So, the group needs to deactivate as much of the power in the wing as possible to divert power to the Core access door. Ben and Terry stay at the control room with Bryan and Junior, while Jake and Hector go to the South Wing, and Matthew and Takeo go the North Wing to deactivate the power relays.

Later, Ben and the rest of the group move to the Shooting Range on Level 1, while Jake, Bryan and Matthew go the Maintenance Area to activate the fifth generator. The trio make it back to Level 1 and hear gunshots, to find a group of dead soldiers by the Shooting Range. Ben thinks that Bryan is the one who started opening fire while Bryan and Matthew think it was Ben. Ben also managed to log into the Security Network to find useful info, like how doors open in the upper levels with the employee's shoes. He also finds "Code Red", which is a direct order from to people above Security Clearence 3 to eliminate everyone below said security clearance. Ben later looks through the files and finds that no one named "Matthew Porter" ever worked at the A.R.C., the latter explains that he is an intelligence agent working for his superior. The group then make a plan to reach the next level. Since the group has no way of reaching the Core without someone in one of the other wings to start the access cycle, Ben suggests using a Cypher which can open any of the doors in the Core. Ben enlists Jake to go scavenge and rebuild cypher parts in the East Wing, so he can upload a new AI program- which will make the rebuilt cypher update the objective of all the facility's cyphers to open the access of any of the wings in the Core for the group. Ben also gives Jake an optional quest to fetch some of his programs on a CD in his East Wing dormitory, and will give Jake the Shoulder Flashlight in return.

Thanks to Ben hacking the cyphers, he and the group are able to move up to the oxygen room in the East Wing on Level 2, via the elevators in the Residential Area. However, after reaching the wing, Ben's hack was discovered, and in response the cypher codes were changed. The new access codes, as correctly guessed by Ben, are likely located in the mainframe in the South Wing. Jake can accept another quest here to help Ben gain better access to the mainframe, by plugging Ben's disk directly into the central computer. If Jake does, Ben will be able to help him through the North Wing. Regardless, after receiving the new cypher codes, Ben does some more digging through the computer archives and discovers that like Matthew, Takeo is not listed as an employee in the files. When Bryan confronts him, Takeo escapes using stealth technology and steals the head of their cypher. Takeo reveals over the radio that he was sent by his father, The Boss, to track down his sister Mia and terminate the commander of the PMCs, Masahiro Ito.

However, Takeo left the access to the North Wing open, and Jake proceeds there to see if the elevators in the lobby can be used to escape. They were disabled by the PMCs, but Ben states that the consoles controlling the elevators are on the same level. While in the lobby, Ben can open up of the locked doors guarding the keycard for the biology labs if Jake plugged his disk into the central computer. Later on, while Jake passes back through the lobby attempting to reactivate the elevators, Ben realizes that he was let into the network. He warns Jake that he has walked into an ambush, as he lost access to the cameras in the lobby.

Ben is not heard from for some time after this, as Jake is gassed by Ito and separated from the group. With Jake apprehended, the PMCs inform Ito they have discovered and surrounded the others, including Ben, hiding in the oxygen room. Ito orders the ACEs to assault the saferoom, however, Ben manages to escape along with Bryan, Junior, Terry, Matthew, and Eric. He, Terry, Junior, and Eric take the first elevator up while Bryan, Matthew, and rejoining them, Jake, hold off the PMCs.

After reaching Level 5, Ben and the others evade the PMCs guarding the level and wait for the rest outside the parking garage. Once the group is reunited, they storm the lobby of the carpark- however, Ito and a squad of mercenaries were waiting for them, and the whole level had been rigged with explosives. After Matthew and Eric are killed in the following confrontation, Ben and the remaining group head back towards the Core access which closes before they can reach it. Ben, alongside Terry, quickly runs over to the core command door, as they can still escape if they can activate the train tracks there. Bryan and Junior, however, split off in the other direction and are trapped on the opposite side. Jake can choose to go with Ben and Terry or Bryan and Junior, but notwithstanding his choice, Ben alongside Terry (and potentially Jake) battle their way to core command. While Terry fights off the PMCs, Ben activates the train tracks, and finds a troubling reading of the MGPS, which is starting to vibrate and will destroy the facility- however, he keeps quiet about this.

The group again reunites in the Core, and take the elevators down to level 0 to reach the train, all the while a Harrier Jet descends vertically from the surface access and fires on them. The jet crashes and Ben, along with Terry, Bryan, Junior, and Jake, safely reach the train. Ben goes to the security booth to start the train, however, when the doors close locking the others inside, Ben finally reveals that the critical state of the MGPS. He tells the others he has to stay behind to deactivate it, before Ito realizes they are still alive. Terry, who made a promise to Ben's late father to protect his son and has cared for Ben for most of his life, is extremely distraught. He jumps out of the train's window as it begins to leave the station, furious at Ben for risking his life. Ben, over the radio, bids farewell to Bryan, Junior, and Jake. He and Terry then head to reboot the MGPS, and are not seen or heard from again.

Although Jake later recalls the facility exploding during his interrogation, it is said no such thing happened and this part of his tale was a stress release. Such would imply that Ben and Terry at least succeeded in stopping the MGPS, but whether or not they ultimately survived against both the infected and Ito's PMCs remains to be seen.

Since the death of Ben's father, he had been under Terry's care for quite some time.

Benjamin knows a lot about hardware, software, and other computer parts. He's the strategist and technician of the group. 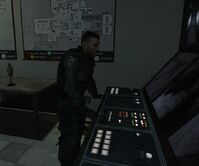